The 2019 conference took place for the first time in Austria. The venue was the Austrian Defence Academy based in the historical centre of Vienna.

In his Welcome Speech, the Commandant LtGeneral Erich CSITKOVITS emphasised that the Academy as the supreme training and ecucation institution of the Austrian Armed Forces, was very proud to host the EuroISME Conference and for the Academy, entrusted with the training and education of Auistria's future armed forces commanders, of civil-military diplomatic personnel and strategic leaders, the topic "Voice and Dissens in the military" was of great relevance :

"As a part of military education and training, ethics is one of the areas where all Western nations share common goals, needs and ends. Together it becomes possible to share insights, create new ideas and establish a more peaceful future. I am therefore convinced that EuroISME's 9th Arnual Conference will provide many valuable opportunties to develop our shared values."

Thanks and opening address of the President 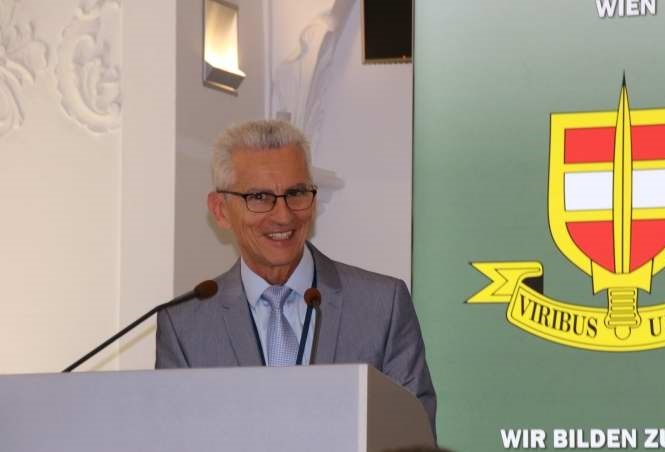 The president opened the 9th yearly conference with great pleasure and addressed the 120 participants with following words:

"First, I would like to express my sincere gratitude to Lieutenant General Csitkovits for his kind words of welcome and his generous hospitality in the “National Defense Academy” of Austrian armed forces. Thanks to the very efficient contribution of his staff, it was possible for us to organize this conference in that gorgeous city of Vienna. I would also like to sincerely thank the whole team that helped organize this conference.

Many thanks also to the whole Euro-ISME team who did their utmost in the organization of this conference.

During this seminar, new and important elections will take place during the general assembly. This is the election of new members for the board as well as the election of a new president. The many nominations we have received, at least for the board elections, show the growing interest in our association. We are very happy with that. I wish in advance to future new members all my wishes for success in their work in the board of director.

As for the future "new president", we all know he will be absolutely excellent, as he was in his previous responsibilities… I will not say more..."

Impressions from the Conference

During the Opening Session, the participants were addressed by the Secretary General of the Austrian Defence Ministry, Mag.Dr. Wolfgang Baumann  and had a Key note speech given by Dr. Ashley Savage (Austria), on “Combating the Intramural and Extramural - Challenges to Effective Whistleblower Protection in the Military”.

The conference was also the occasion for the presentation of the recently published Volume 5 of the Euro-ISME Book Series on International Studies in Military Ethics which is the trilingual publication of Samantha J. Hope’s master thesis, winner of the 2017 Euro-ISME Prize, entitled "Is it possible to prevent sexual violence against women, men and children, or only to manage the after-effects?.

In her excellent Keynote Speech,  Kathryn Bolkovac, former UN police officer and author of ʽThe Whistleblowerʼ - Sex trafficking, military contractors and one woman’s fight for justice", depicted her personal experience and addressed issues including human trafficking and forced prostitution as well as the UN organisation's effort to combat sexual exploitation of women and children.

The hightlight of this years international conference was the keynote speech given by Capt. (ret) Dr. Tom Clonan (Rep. of Ireland) on “Blowing the Whistle on Sexual Violence in the Irish Armed Forces"  He got "standing ovations" for his captivating report on his personal and professional implications for "Whistle-blowing in the Military Environment".

The official Annual Dinner Banquet was the most suitable moment to hand out the trophy to the winners of Euro-ISME’s prize for the best student thesis written on military ethics. The prizes went to

More about the Euro-ISME Prize Rules and the laureate as well as a downloadable pdf-version of her thesis on our special “Thesis Prize” page.

The second conference day begun with a “Special Panel”, dedicated to the ongoing Peace-Process in Colombia : moderated by Mr. Olivier Lagarde, peace-worker at the Center for Research and Popular Education (CINEP). Mr. Victor Barrera, researcher and team co-ordinator of CINEP, presented his views on the “Relations between civil and military personnel for the construction of peace”.

The panel was closed by a vibrant statement of the Ambassador of Colombia, S.E. Jose Rodrigo Rivera Salazar, thanking the EU for diplomatic and political support during the peace negotiations and calling for endurance and faith until the achievement of reconciliation.

The meeting again also provided the opportunity to hold “the Ordinary General Assembly”. The members unanimously approved the annual reports of the executing directors and of the treasurer and they (re-)elected the members of the Board of Directors for the next tenure of office.
But the most important item on the Agenda of this year’s OGA was the adoption of revised statutes and internal provisions, including a “Code of Conduct & Complaint Procedure (CC&CP), which got the unanimous assent under the applause of the present members.