Dear Members and Friends of Euro-ISME.

It is rare for an event intimately connected with the subject of military ethics to make headlines around the world. When that does happen, it is usually because something has gone disastrously wrong, to the extent that even those who live and work outside the military environment are genuinely shocked and concerned.

The publication by the Australian Defence Forces of a redacted version of the Brereton Report into ‘Questions of Unlawful Conduct concerning the Special Operations Task Group in Afghanistan’ in the past few days was such an event[1]. 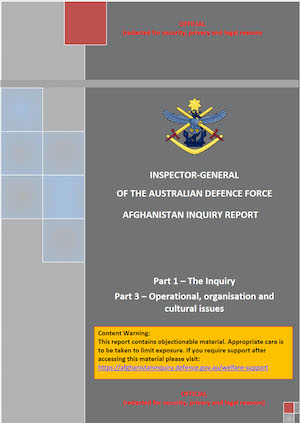 The impetus for the Report were allegations revealed by military sociologist Dr Samantha Crompvoets in 2016 while she was conducting (an unrelated) study into the culture of Australian special forces. The Report took four years to produce and involved the study of over 20,000 documents and 25,000 images, as well as 510 interviews of 423 witnesses. The Report itself runs to well over 400 pages.

The Report’s sobering conclusion is that, over an extended period, there was ‘credible information to substantiate 23 incidents of alleged unlawful killing of 39 people by 25 Australian Special Forces personnel, predominantly from the Special Air Service Regiment’[2]. Although much of the material in the Report has been redacted for legal, security or privacy reasons, it clearly represents a thorough investigation into the allegations of illegal conduct.

Although I paraphrase for the sake of brevity here, the bulk of the Report is necessarily concerned with determining whether the allegations had a basis in fact. However, I want to draw your attention to Annex A[3] of the Report which focusses more precisely on the likely underlying and immediate causes of the behaviour and what should be done to prevent a recurrence. The Annex A was researched and written by Professor David Whetham, who was appointed Assistant Inspector General of the Australian Defence Forces for the purpose and who, amongst his other accomplishments is a co-founder Vice-President of Euro-ISME

Annex A describes the circumstances in which an elite unit departed from adherence to the laws of armed conflict to an extent that such behaviours became institutionalised. Annex A suggests that there were a number of interlinked reasons for this. They include the inevitable secrecy surrounding special forces operations, the elite status of the personnel involved which led them to believe that ‘normal’ rules did not apply to them, (a feeling arguably accentuated by the belief that some of their missions were more suitable for less highly trained soldiers) and a command chain that was uninquisitive, to put it at its most charitable. I would urge you all to read Annex A in its entirety -->> here.

What I want to do here is to reiterate, as strongly as I can, the fundamental importance of two of the key themes which emerge from Annex A: leadership and education/training.

Much of the process that will inevitably follow publication of the Report will focus on the leadership (or lack of) at the unit level. However, those who undertake the most dangerous and demanding missions deserve outstanding leadership from higher levels of command. At our Euro-ISME conferences, ‘leadership’ is probably the word most commonly heard in connection with ethics, and not without reason. It is the sine qua non of both military success and the discipline that sets the military apart from the insurgents and terrorists who they fight on our behalf.

Better leadership would surely have helped not only to potentially stop a culture of excess before it became serious, but also to have ensured that those in the field who had concerns about the value of their missions (inter alia) were listened to. Turning a blind eye up the command chain became a habit and was arguably a significant factor in the situation getting out of hand. Misplaced loyalty, however well intentioned, is not leadership.

Education and training, in both ethics and the laws of war, alongside courageous leadership, is the primary mechanism to minimise ethical excesses in the field. Commanders do not allow their subordinates to deploy without being thoroughly trained in (for example) the operation and maintenance of weapons systems, or how to survive in a hostile climate.

But much less attention has historically been paid to how to deal with the real ethical challenges that will confront personnel on operations where decision making is increasingly devolved to relatively junior levels (as is particularly the case with special forces). Many of those reading this note will be directly involved in educating and training the military, so I suspect they will need no convincing of this. But the Australian example provides an irrefutable case for the importance of work in this field, and how serious the consequences can be for the self-esteem of a whole nation (literally) if it is neglected.

The Brereton Report has strengthened Euro-ISME’s resolve to continue our work to promote the teaching and practice of military ethics. The events described in the Report confirm our belief that military ethics is a subject of immediate relevance at every level of conflict, from the strategic to the tactical. We are privileged to be associated with you in this undertaking.

Euro-ISME and Kings’ College London have invited a panel of uniquely qualified people to discuss ethical issues around the publication of the Brereton report.
Please find more information here.